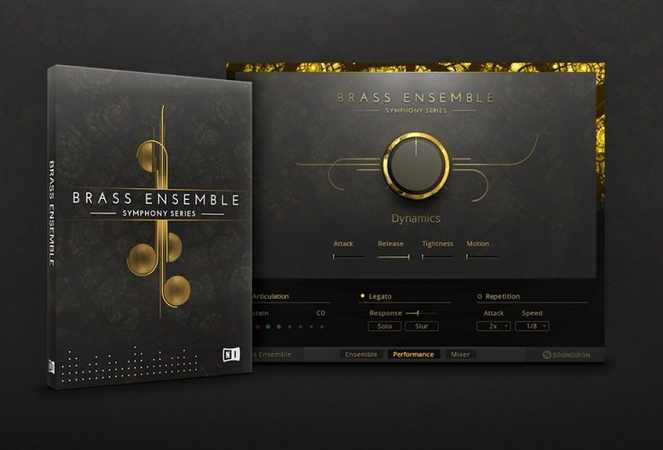 This is a light version of the Native Instruments Symphony Series Brass Ensemble library. The library features a big 32-piece brass ensemble, comprising of four eight-player sections: Trumpets, Horns, Trombones and Tubas. It has a good list of features with 183 articulations, effects, true and emulated legato, and up to eight round robins for the shorts. The instruments sound really epic and have a good range of dynamics. This library works great for hybrid and modern scores which need a more upfront sound, but can be made to fit more traditional scores as well with a few tweaks. The recordings were done in a church, so the sound is quite wet. The instruments were recorded centered, so it adds flexibility when non-traditional panning is needed, while also giving good results in traditional positions. Ultimately, this is a good library for those having epic, modern and hybrid scoring needs.

Following changes were made to the library:
1. The “Stereo” and “Far” mic position sample groups were removed. The default “Stereo” mix is a bit too wet, and the “Far” mic can be easily substituted with a reverb. The included “Close” and “Mid” mic positions allow for a great deal of flexibility while preserving the sound of the hall the brass was recorded in as well.

2. The samples in the original release were in 24-bit 48kHz format. The samples were converted to 16-bit 48kHz and repacked into NKX containers. A null test results in a peak of -85dB, which won’t be audible at all. Also, after quite some testing, no issues were found with noise floor build-up when playing lots of notes. The conversion process takes the size down to 7.42GB from the original 27.05GB, which is an 73% reduction!

NOTE: Kontakt v5.8.0 or higher is required. This library does not work with legit full version of Kontakt and k’d Kontakt is necessary to use this library.