Everybody knows that the blues comes out of the south, and was played on acoustic instruments. Then the blues migrated to the cities, and the urbanization of the blues brought about a lot of changes with all the influences that were there. The most radical was the electrification of the blues – the use of amplifiers and electric guitars gave rise to a variety of tones and signature voices.

Robben Ford’s Urban Blues Revolution examines this modernization of the blues with rhythm and soloing examples, both of which illustrate traditional approaches followed by a more contemporary approach. For each of the 6 sets of Performance Studies, Robben will first play rhythm guitar over the track, and then solo over the track providing insight for his approaches.

”We’re going to work with six tracks that are inspired by the modernization of the blues. For each of these rhythm tracks, I’ll show you the way that it was traditionally played, and then show ways that I’d play it today. Also, I’ll show you how I’d solo over these tracks.

Blues Boogaloo: Rhythm & Blues Boogaloo: Soloing
”’Blues Boogaloo’ is inspired by a song by Slim Harpo. I’m going to play the basic rhythm part for that, and then expand on it. I’ll then play over the track so that you can get some ideas for soloing.

Dance Hall Slim: Rhythm & Dance Hall Slim: Soloing
”I’ll play rhythm over a track we call ‘Dance Hall Slim’, which actually has some Cuban influence in it. And then we’ll look at some of my improvisational and soloing ideas for this track.

”’Back Street Vamp’ is something that the rhythm section and myself came up with when preparing for this course, and gives us an opportunity to play a few more chords than some of the three chord blues tunes. After you’ve seen some of the chordal ideas for ‘Back Street Vamp’, I’ll play some solo ideas for you.

King Snake: Rhythm & King Snake: Soloing
”This is ‘King Snake’, a four-on-the-floor, straight up 12-bar blues. After I present some rhythmic ideas for ‘King Snake’, I’ll take some solos to illustrate how to play over this type of groove.

Sam’s Jam: Rhythm & Sam’s Jam: Soloing
”I’m going to play rhythm over a track called ‘Sam’s Jam’, which is a surf beat. A different kind of feel in the blues. After we’ve looked at some rhythm ideas for ‘Sam’s Jam’, I’m going to improvise over this 12-bar progression.”

Robben will explain and demonstrate all of the key concepts and approaches along the way. You’ll get standard notation and tabs for all of the rhythm and soloing Performance Studies. Plus, Robben includes all of the rhythm tracks for you to work with on your own. In addition, you’ll be able to loop or slow down any of the performances so that you can work with the lessons at your own pace.

Grab your guitar and let’s get urban with Robben Ford! 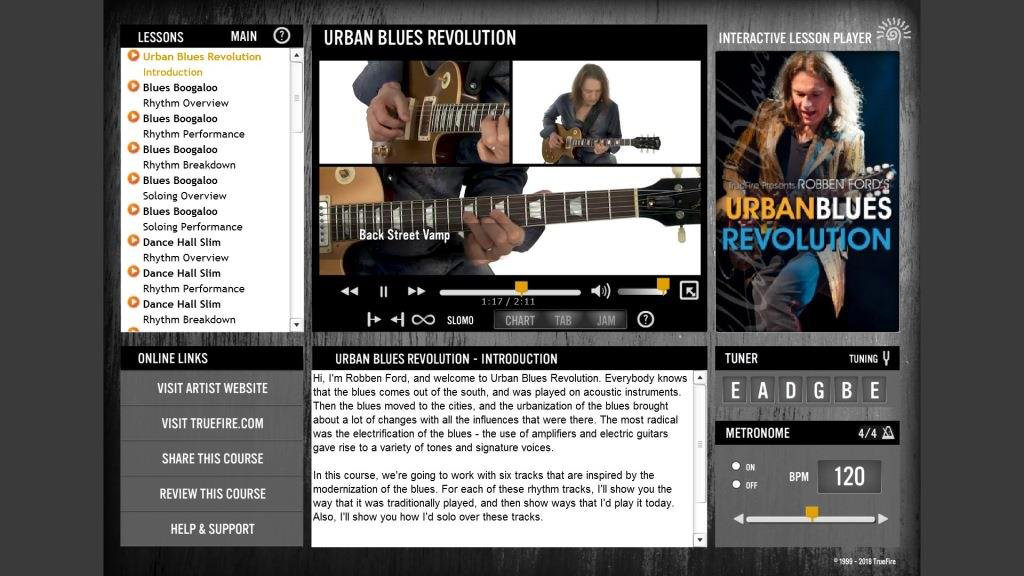