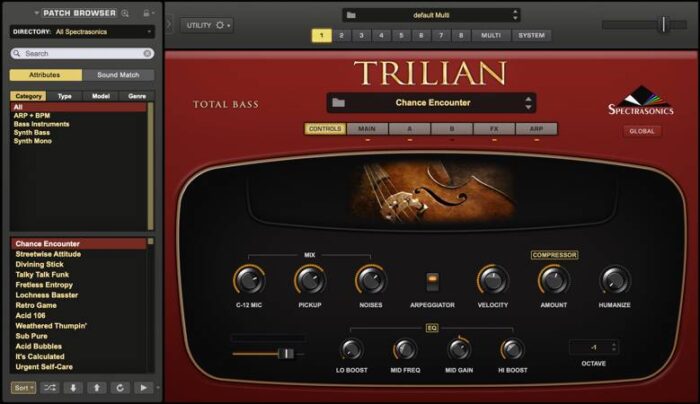 High Resolution Interface
Trilian supports a newly redesigned, high resolution interface with support for HiDPI displays. The modernized GUI is now easier to use and resizable to fit comfortably into your workspace.

Custom Controls
The Custom Controls presented for each Patch allow you to go far beyond the original sound. The intuitive interface includes useful performance controls and high-quality creative effects processing specially crafted for each Patch. Thousands of included Patches showcase the remarkable versatility and ability to dramatically customize these inspiring sounds to your music.

Authentic Expression
Unique subtleties have been deep sampled, including legato and glide articulations, mechanical noises and release overtones to bring these sounds to a whole new level of authenticity. Trilian’s stunning Acoustic Bass is one of the most detailed instruments Spectrasonics has ever released, with 4 audio channels and over 21,000 samples to create this single instrument! All of this puts a depth of realism into performances that is truly inspiring.

Omnisphere Integration
As a bonus for Omnisphere users, Trilian integrates fully as a satellite instrument within the Omnisphere® interface, allowing the exploration of endless new sonic possibilities and combinations.

How to install on Windows.

• Flow Capture: New Standalone feature allows you to grab spontaneous musical moments as audio, MIDI and sound formats simultaneously
• Fixes an issue in Logic 10.7.4 where loading an AU preset file did not update the AU preset name at the top of Logic’s plugin window
• Fixes a bug where sending the plugin Pitch Bend sequences that contain a wide range could cause audible stepping at large Host buffer sizes