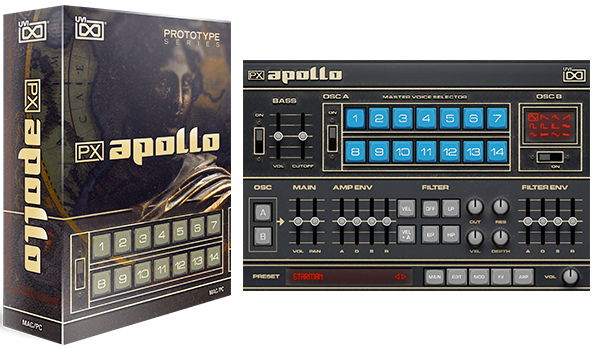 PX Apollo is based on a rare synthesizer prototype from the early ‘70s of which only 2 are known to exist. Part of a larger project that was eventually abandoned, this instrument was the precursor to one of the world’s first and most prolific polyphonic analog synthesizers. With a sound that can be described as rich, warm and surreal, this instrument was extraordinarily playable for the time, sporting velocity sensitivity and a performance interface, while its polyphonic 71-voice architecture signaled the coming paradigm shift in synthesizer design that would soar during the following decade.

Instrument
The PX Apollo project represents an enormous effort and commitment to quality on many levels. Due to the components available at the time of their design, early polyphonic synthesizers were and remain particularly susceptible to failure and require continued maintenance. The unit used for PX Apollo was no exception, initially inoperable it required a tremendous restoration effort and no expense was spared to ensure complete authenticity and original functionality.

With the restoration complete we set about to document this historic instrument as accurately as possible. We created a huge master sample catalogue with the best hardware available. Each key was sampled in a multitude of configurations and for each 4 round-robins were created per note. The resulting PX Apollo sound bank consists of over 4,000 samples. From this library over 150 patches were made by our sound design team, delivering a fantastic collection of ready-to-play patches.

The UI for PX Apollo was inspired by the aesthetics of the original hardware, while the layout and control schema were designed to provide intuitive and efficient use while maximizing flexibility, allowing for both quick edits to preset sounds and deep customization by way of a full compliment of synthesis tools and effects including 3 oscillators, envelope generators, high-quality filters, pitch and stereo controls and per-oscillator modulation and arpeggiation.
PX Apollo provides a glimpse into a key moment of synthesizer history at one of the industries most important turning points, delivering a rich and detailed sound with a warm and pronounced character.