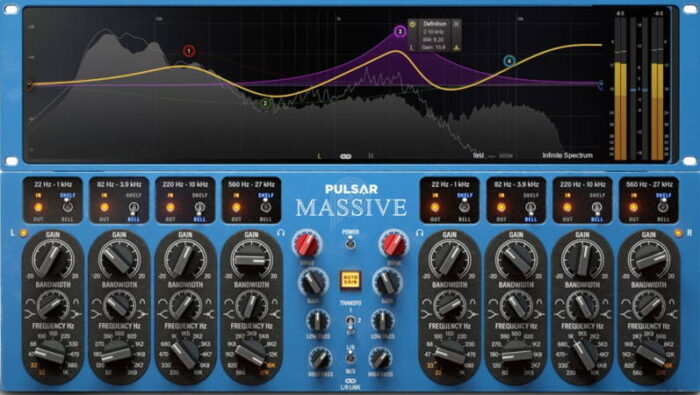 The most complete passive EQ plugin. Musical and intuitive, a must-have for mixing and mastering.

A DIFFERENT EQUALIZING EXPERIENCE
Pulsar Massive is an emulation of the Manley Massive Passive* EQ that is present in almost every mastering studio in the world. This machine was designed as a synthesis of the best passive equalizers of the last 70 years, and several distinct features in the design give it an absolutely unique sound.

First of all, the fully parallel topology of the EQ gives completely different kind of response to a digital equalizer with the same settings. A parallel equalizer’s tonal corrections aren’t cumulative, but tend to interact with each other, resulting in a more intuitive and fluid way to shape the frequency spectrum.

As well as this, the whole equalization circuit of the original hardware is passive, and therefore has several inductors. These inductors, machined and wound specifically by the manufacturer, are responsible for a creamy, non-linear and organic sound due to the magnetic saturation they introduce.

Finally, the input, output, and internal gain stages are entirely tube and transformer operated, providing another step of warm and organic coloration.

Our software meticulously reproduces all these important aspects of the original hardware, but also offers an interface inspired by its ergonomics, which were much appreciated by its users.

But we’ve taken Pulsar Massive even further, adding all the key features you would expect from a modern, versatile EQ plugin, including visual curve editing for a fast workflow and a drive parameter to push the inductor and tube saturation stages harder for more vibe.

* No iLok Driver installation is
required to run.