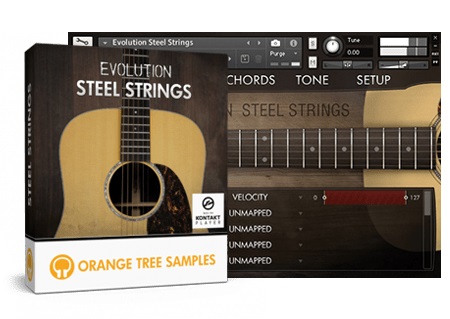 Until now, if you wanted a realistic acoustic guitar in your productions, the only serious option was to use a real guitarist. Numerous sample libraries and virtual instruments have come and gone that proclaimed realism, but fell far short of delivering on that promise. At best, they could be used to fill in a guitar part in pre-production mock ups that would later need to be replaced by a real guitar performance. All were better buried in the mix rather than exposed. Announcing Evolution Steel Strings, the acoustic guitar sample library that will change your perception of what is possible for MIDI-based guitar simulation. 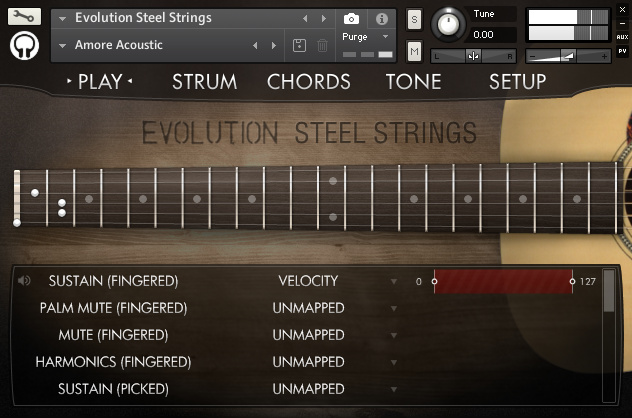 Evolution Steel Strings presents a breakthrough in sampled acoustic guitar. No other acoustic guitar sample library or virtual instrument has achieved the same level of realism. From single notes to chord strums, Evolution Steel Strings uses a combination of sampling, scripting, and physical modeling-based principles to bring you an astonishingly easy to play KONTAKT sample library with results so realistic they can be used in final productions with confidence.

Evolution Steel Strings features an iconic, Martin D16R steel string acoustic guitar recorded in stereo with top-notch mics and preamps in 24-bit, 48 khz for the best tone and fidelity possible. While most acoustic guitar sample libraries are sampled using only one mic, we used stereo micing, for a more natural tone, and also adjustable stereo width. The superior construction of the guitar used resulted in minimal buzzing on even the hardest hit notes. (Buzzing is an often cited problem with some of the popular acoustic guitar libraries for KONTAKT on the market.)

– Both fingered and picked articulations totaling 6.5 GB of uncompressed samples.
– Extensive scripting from the Evolution guitar engine, makes for an intuitive, instant playable library from either or a MIDI keyboard or when sequencing.
– Individually sampled strings, powered by a performance modeled string/fret selection engine.
– A proprietary resonance engine for unparalleled organic realism from a sample library.
– 4x alternating samples to avoid the machine gun effect when repeating notes.
– A unique monophonic/polyphonic hybrid. Play legato lead lines or chordal parts in a single patch.
– Alternate tunings that not only change the range of the instrument, but also realistically alter the tone of individual strings.
– Legato articulations, including slides.

Changes in the update:

The last update we released allowed strumming patterns to sync with tempo changes. Unfortunately it also introduced a bug where, depending on the timing of the pattern keys, it would occasionally skip a beat in the pattern, causing the playback to sound consistently out of sync.

We took the opportunity to add a new guitar cabinet to the collection called “1×12 Rattlesnake”. This particular cabinet is a model Carlos Santana is known for playing.