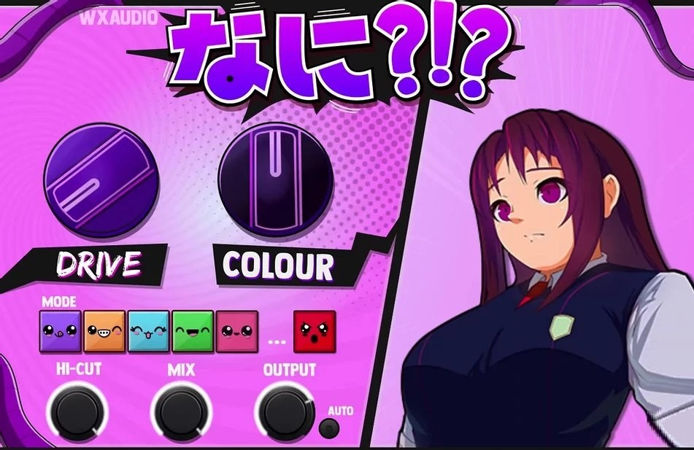 Nani Plugin is new distortion plugin, as funny as it may look, it actually does a great job.

Compatibility:
Plugin is only available in VST3 format.

What`s new:
Audio
Added over sampling. You can find this new option in the little pop up menu under the 4 bottom dials

Characters
Suki – A crazed distortion deviant who is a bit more into it than the other characters.
NANI Announcer Sato – Finally NANI diversifies and adds a male character. Don’t worry, there’s no dong.
Added a Bio button for all the characters. Just thought it was cool to expand the lore a little.

Achievements
Added achievements and stat tracking to the plugin.
I think this is a really cool feature for plugins. I feel like we use plugins so often, and people love to rep which plugins they use, why not add stats?
There are some pretty easy achievements, some very hard, and some that are a bit of a mystery on how to unlock. We look forward to seeing the progress the community makes!
(If the achievement system does well, we aim to put a new plugin out in the near future that expands even further on this idea.)

FOR THE USERS
The achievement system is a pretty new idea and has not been tested in every DAW. Each DAW handles plugins differently, so some DAWs may not respond correctly. PLEASE let us know if you experience any issues with your particular DAW, or just the achievements in general.

Improvements
The validation system has been slightly overhauled, which will hopefully fix any issues of the validation seemingly failing after several months of use. It’s not impossible for it to happen again, but there should be far fewer cases.
Improvements for the start-up of the plugin to reduce delay time.
Improvements to the memory management of the plugin to reduce memory footprint.
Fixed most issues with some characters animations .

Secret
Without saying much, I’m a big fan of convoluted easter eggs in video games, so I added one to NANI. Good luck! There’s a prize at the end. ​

Formats
We did not include a 32 bit format of this update, as continuing support for 32 bit is becoming more and more obsolete.

NOTE:
Booo, been a long time!