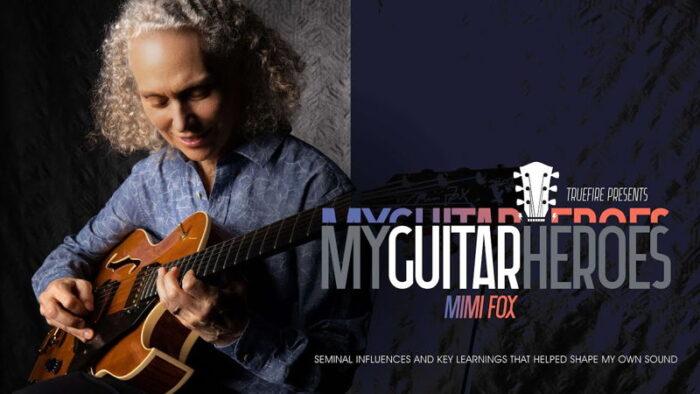 Every musician has a long list of other musicians, past and present, that have inspired, influenced and helped shape their own sound and musicality. It’s the natural evolution of music. We asked Mimi Fox to pass on to you some of the key learnings that were passed on from her Guitar Heroes.

”Wes Montgomery, John Coltrane, Pat Martino, Charlie Parker, Joe Pass, and Antonio Carlos Jobim are just a few of the players that have all greatly influenced my own sound as I’m sure they’ve influenced many other players.”

”One of the things I absolutely love about Wes’ sound was the way he used compound arpeggio phrases, so we’ll explore that together. In the first series of lessons.

Next we’ll examine John Coltrane’s signature use of 1,2,3,5 cell patterns and his deep, emotional connection to his music, which is one of the things that greatly impacted my approach to improvisation.

We’ll look at chromaticism and some of the ways that my guitar hero Pat Martino uses it in his own solos and improvisations. Charlie “Bird” Parker’s blazingly fast, virtuosic sax lines serve as an inspiration for anyone who loves bebop.

The purity and versatility of Joe Pass’ sound makes him one of the greatest guitar players of all time, and he’s certainly been a very big influence on me. And last but not least, we’ll take a look at the legendary Bossa Nova and Brazilian music composer and guitarist, Antonio Carlos Jobim.”

In this course, Mimi will first introduce her heroes to you and describe why she found them so influential. After each discussion, Mimi will then present a performance study illustrating those influences in a musical context, over a backing track. A breakdown follows every performance and Mimi will explain and demonstrate all of the key concepts and approaches in play.

You’ll get standard notation and tabs for all of the performance studies. Plus, you’ll be able to use TrueFire’s learning tools to sync the tab and notation to the video lesson. You can also loop or slow down the videos so that you can work with the lessons at your own pace. All of the backing tracks are included to work with on your own as well.

Grab your guitar and let’s dig in with Mimi Fox!