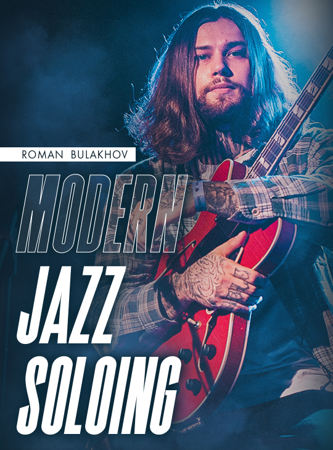 Side step the norm and embrace the world of modern jazz as Roman Bulakhov’s JTC debut shows you how to weave solos filled with outside lines, chordal sections and hybrid picked licks.

Roman Bulakhov arrives at JTC with his take on contemporary jazz through three full tracks and 15 licks. A supreme lesson in thinking outside of the box using accessible ideas that can be used in realms away from jazz too.

With “Thoughts in the Car”, Roman builds a track around a central melody that makes the most of chords and scale based improvisations. In “Hustle and Bustle Song” he ups the tempo and engages swing time while throwing in some superimposition for a lesson in tension, conflict and resolution. Finally, we have “Beauty Is in the Eye of the Gazer” which is a track built around suitably beautiful chord progressions that make use of every corner of the fretboard.

In order to really let you dig into the magic, Roman has also played five sections from each track, both fast and slow. These act as a collage of concepts that will give you improvisation springboards that you can use in your own playing. To help you along, Roman has provided a theory guide which breaks down each lick and grounds them into understandable music theory.

You’ll explore ideas based around the whole tone, blues pentatonic and Bb minor scales, as well as lydian and phrygian modes. There’s also licks based on chord tones, flavour notes and a heap of different arpeggios, giving you a familiar entry point to some of Roman’s favourite concepts and how they are used in real music situations.

On the technical side you’ll use pull offs, hybrid picking, double stops, triplet rhythms and muting, with licks that perfectly meander in and out of a central key. Once mastered, the framework of these licks can be applied to your own playing to add flair and open up new avenues of exploration.

Whether you’re a hard hitting riff monster or a shred happy legato loving fusion fiend, this examination of contemporary jazz is chock-a-block full of ideas. Create new melodies, harness dissonance and make the most of jazz ideas as you take on this unique JTC debut.