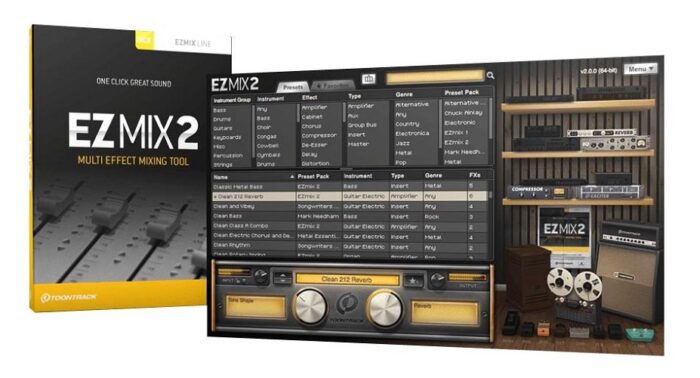 Toontrack EZmix is a simple, yet powerful mixing tool that gives you access to a huge array of mix presets for the whole gamut of mixing needs. Whether you need to mix drums, vocals, guitars, bass or keyboards this is your tool. Simply insert EZmix on a channel strip in your sequencer, and pick a preset to apply to your audio source. Done. In addition, EZmix comes with a standalone host that you can use to practice your guitar with using the included amplifiers and cabinets simulations. Of course, those are available when using your recording application too!

All the previous functionality and content from EZmix is still intact and working in EZmix 2. The major difference however, is that the new and revamped version comes with settings based on high-tech mastering effects, new reverb algorithms, guitar/bass amp and cab simulation, a completely revised interface and a large core content boost. Essentially, EZmix 2 is a mixing engineer, mastering suite and guitar/bass amp all rolled up into one package.

Selecting/deselecting filters now works a bit differently: Clicking on a row now deselects all other rows in the column while making/keeping the clicked row selected. To deselect or to multi-select, click while holding Ctrl (Windows) / Cmd (Mac).
The effect box tooltips are now more specific about certain effects that are being used by a preset. For example, it no longer says just Distortion but instead Tube Nine, Fat Muff, etc.
The effect box tooltips now say if the current preset contains more than one of an effect with the same name (internally either the same or different effects).
The shape control tooltips now use the more specific names for certain effects (like the effect box tooltips).

Internal LFOs can now again control the Time parameter in delays. This last worked in version 2.1.1. Several presets in the “Ambient Delays” and “Ambient Reverbs” packs are affected, as well as one preset in “Indie Guitars” (“Modulated Pitched Delay”).
Increasing the Time parameter in reverse delays (if a shape control is bound to such a parameter) should no longer cause any click/pop sounds.
Opening Pro Tools projects containing EZmix would sometimes crash (since version 2.1.4).
The selected preset/favorite was not shown as modified (with an asterisk) if the input or output level had been changed by less than 0.4 dB. 0.1 dB is enough now.
In shape control tooltips, several effects with the same name (but internally being different effects) could be listed multiple times, for example “Amplifier Tone, Amplifier” – now they are merged.
Sorting by Instrument, Type, Genre or Producer was quite slow and has been optimized.