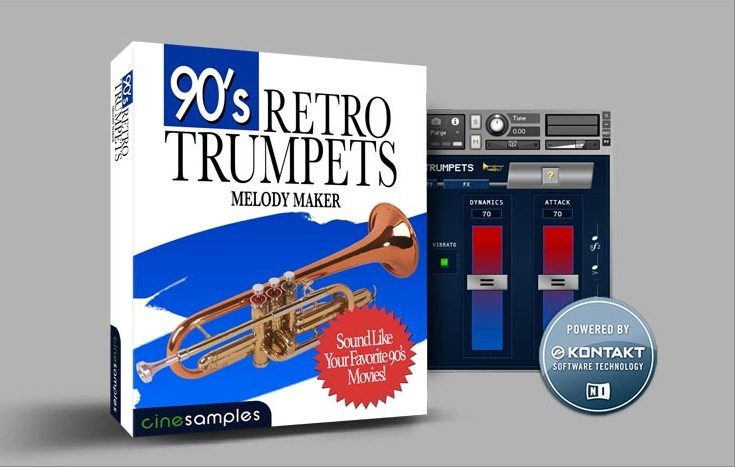 90’s Retro Trumpets is a faithful emulation of all things trumpet and all things recording from this magical time that crafted many of our childhoods. Thoroughly researched, this melody-making library resurrects the actual microphones and the forgotten trumpet techniques that gave these scores such unique color, tutti, and magnificence. Recorded at the MGM Scoring Stage at Sony Pictures Studios in Los Angeles.

It’s shocking that the 90’s are now considered a long time ago. Many titans of the session playing world of this period have retired. As they are replaced by their younger colleagues, certain principles of pedagogy and musicality have been retired as well.

In the control room, while many of the central philosophies have remained the same, modern recording seems to have evolved to use cleaner, higher bandwith and less colored gear. It’s now a slightly different sound, which some favor, some disdain, and most simply don’t notice.

Last year, while recording something unrelated, the original pencil marked Jurassic Park session recall sheets popped up out of the filing cabinet for some nerdy ogling. Right there on this aging paper was the actual recipe used to record the orchestra for these landmark sessions. The vision was clear – replicate this sound. We went to great lengths to do this while always referencing the recall sheet and using the memories of some of the Sony Scoring crew who were actually there.

Here are the steps we took.
– We rented the three exact modified Neumann M50 microphones used as the Decca Tree on the original sessions. They feature a unique hi-end crispness and transparency that is instantly recognizable. These microphones have mostly been retired since the early 2000’s. We matched every other microphone on the recall sheet and set them up in 90’s fashion.
– In the control room we patched in the exact preamp settings on the exact same preamps that still are mounted on the studio wall to this day. Most of these are now retired and replaced by cleaner and less colored signal paths by companies that weren’t created yet at the time.
– The favored Lexicon 480 hardware reverb unit was taken out of retirement and the exact reverb patch was dialed up. This was “THE” patch of the 90’s for most of these recordings – it is so 90’s sounding and is also instantly recognizable.
– One of the sonically most interesting parts of the recipe is the use of the Avalon 2055 – a delicate Class A discrete Stereo Hardware EQ that colors the high end in the most unique and hi-fi way imaginable. Also retired in favor of other mastering EQs, this box is a gem. When used correctly, it gives the most glossy sheen imaginable on the overtones, and when used incorrectly gives the harshest of harshnesses.

A MUSICAL JOURNEY BACK IN TIME
Over time, many subtle things have changed for trumpets. The combined result of these changes yielded a more powerful, weightier, and forward-sounding modern section. The 90’s sound was less brassy, more streamlined, cantabile, and quieter in general. Different tonguing and blending philosophies were favored. Both sections play with great agility or force, they just sounded different.

Restoring some of these 90’s techniques was the critical second part of the recipe.
– 1+1+2 = 4. In the 90’s, the venerable trumpet veterans of the day played on horns they individually favored instead of a horn dictated by the chart or principal. An A-list 4-trumpet ensemble of the early 90’s was often made of one Eb Horn (played by the principal), one C horn (played by the second chair), and two Bb horns (played by third and fourth chairs). The differing sizes of these horns projects an imperfect yet thick series of overtones into the room – incredibly tutti sounding, like the blending of a violin section. Having the principal on a smaller horn also lends a tireless and effortless quality to the high octave. Some weight on the lower notes is lost on a smaller horn, but this is where the third and fourth chairs contribute on their larger Bb horns. Modern sections often tend to favor four Bb or four C trumpets.
– principal players of the age, especially in the brass section, were the alphas. The idea of a democratic section where each player contributes an equal percentage of the sound wasn’t a concept yet. The principal was the loudest on a unison, the principal was loudest on a divisi chord, the principal hair-pinned louder, the principal was atop always. The other players knew and respected this, and instead contributed a tone full of supporting qualities to blend with the principal. The combination of three supporting trumpets and one piercing trumpet is a mainstay of this era. It has rarely been heard since. For this library we recorded the dynamics with this ratio in mind.
– Vibrato: When playing tutti, Trumpet Ensembles do not use vibrato. Four trumpets vibrating at different speeds tend to sound more like a mariachi band and less like a classical trumpet section. When vibrato is heard within a section it is the principal carefully using his/her judgement when to vibrate. This is often at the apex of a phrase, a particular important note, or toward the end of a long hold. During this time, trumpets 2-4º will not vibrate at all. The vibrato we captured in this library was the principal player vibrating at the highest dynamic layer only. Use it as described above for realistic playing. However, be sure to bypass (using the bypass vibrato performance switch) on quick crescendo rips, since that would not be a proper use of it.
– A quieter, nobler tone. The overall volume of the brass section in soundtrack recording has increased over the years. This is partly due to upgraded mouthpieces, instruments, pedagogy, and partly due to the presence of highly brassy composer mockups. Upon hearing these hyped mockups, session players have emulated this sound in an effort to satisfy the composers writing them. While sometimes appropriate, this style of playing is now found in soundtracks of all styles, including ones where it is less appropriate. In the 90’s, the median forte was a quieter and richer tone. This is especially noticeable in the upcoming 90’s Retro French Horn library, but quite noticeable in this Trumpet library. Experiment with having the modwheel about half way up, which would represent a “comfortable and sustainable” forte for session players. Ride the wheel into the higher zones to follow the phrase or for the most exiting moments only.

Requires Kontakt 5.6.8 and above