Live 10 comes in three editions: Intro, Standard and Suite. They share common features, but Standard and Suite have additional features, instruments, Packs, and effects. Developer Ableton has announced Live 10, the next version of its popular music production software. Live 9, Ableton’s last major upgrade to the title, came out in 2013 alongside the debut of Push, a hardware controller for Live with 64 pads designed to play and program beats. There’s a lot of new, notable changes to Live in version 10. Ableton is introducing four new plugins — the tools used for everything from sound creation to signal processing — that will come standard with the software: Wavetable, a synth that promises “deep, flexible modulation,” Echo, a multi-purpose delay unit for adding texture, Drum Buss, an all-in-one drum sculpting tool, and Pedal, which delivers overdrive and warm distortion. Some previous plugins have been given a refresh: Utility now has an improved gain range and the ability to mono bass separately, and EQ Eight and Split Stereo Pan have extended low frequency slopes for finer control. You can also look forward to a new library of sounds. 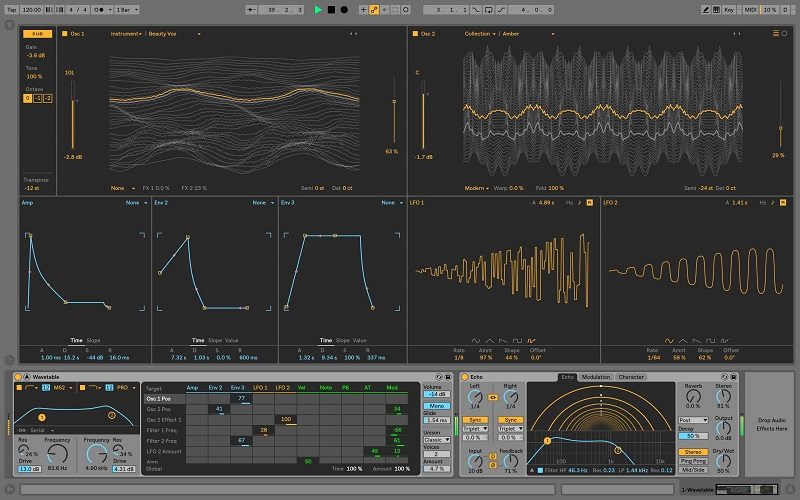 One of the more exciting new features in Live 10 might be initially glossed over by many: Collections. Ableton describes Collections as a way to organize favorite or most-used plugins, sounds, and more, but really, it’s a customizable tagging system. It’s literally something I pined for in a tweet earlier this year.

Create bolder sounds with Live’s new devices. Stay in the flow with a multitude of workflow improvements. Do even more away from the computer with Push. Build your sound with a curated library. And get the unlimited potential of Max for Live, seamlessly built in. 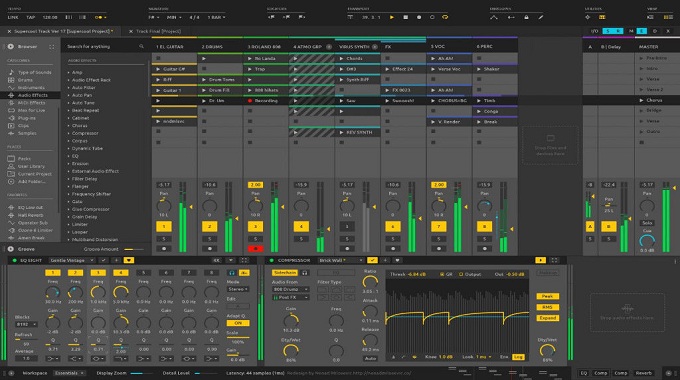 Wavetable
Immediately playable, infinitely capable, Wavetable is a new synthesizer built by Ableton. Shape, stretch and morph sounds using wavetables derived from analog synths, and a range of other instruments and sounds. Start sculpting sounds right away—even without a deep knowledge of synthesis—or explore its rich palette and potential through an intuitive interface.

Echo
Echo brings together the sound of classic analog and digital hardware delays in a single device—your new go-to delay. Drive and shape sounds with its analog-modeled filters, turn up the noise and wobble for vintage imperfections, or add modulation and reverb to create diffuse soundscapes, wailing feedback and more.

Drum Buss
Drum Buss is a one-stop workstation for drums, capable of adding subtle character or bending and breaking drums to your will. Add warmth and distortion with drive and crunch, take control of dynamics with compression and transient shaping, dial in and tune boom and control bass decay with the dedicated low end section.

Pedal
With separate circuit-level models of overdrive, distortion and fuzz guitar pedals, Pedal brings the character of analog stomp boxes to Live. The effect goes all the way from subtle to reckless—it excels at warming up vocals and other instruments, driving synth sounds or completely smashing drums. And of course, it sounds great with guitars.

Stay in the flow
You’ll find improvements to Live that help you stay in the flow at every stage of your creative process, whether you’re getting ideas down, organizing your setup or editing the details of your music.

New melodic step sequencing layout
Simultaneously sequence notes and play them in from the same pad layout – the bottom half of the layout allows you to play notes in real time while the top half lets you sequence them.

MIDI note view
Navigate and refine the notes of your pattern in context directly on the Push display. Press and hold a step in your sequence to zoom in and use the on-screen control to adjust velocity, note position and length.

New library of sound
With new collections of Packs, Live 10 has more sounds that are ready for finished music, right out of the box. They’re set up for tweaking to your needs or taking in different directions. Plus the library has been reorganized to make it easier to find what you’re looking for.

Live will no longer crash when using the Axiom 49 61 Classic script.

It is now possible to set Live’s language to Chinese via the Look/Feel Preferences tab. Info texts and Help View lessons now have Chinese translations.

Updated info texts and added info text translations in German, Spanish, French, Italian and Japanese.
Improved the contrast of the text in the dialog that appears after choosing the Slice to New MIDI Track command.

The “Absolute 14bit” MIDI mapping mode can now be used with MIDI Remote Scripts that appear in the Link/MIDI Preferences tab.
It is now possible to create a “Remote Scripts” folder in the User Library, where user/third-party scripts can be added for use with MIDI controllers. Added scripts will appear in the Link/MIDI Preferences tab.
Recording automation for multiple device or mixer parameters together will now result in less steps to undo on Push.
While recording on Push, pressing the Fixed Length button near the end of a segment of time that corresponds with the Global Quantization setting will cause Live to wait until that amount of time is elapsed before stopping the recording.
When Push is connected, other control surfaces will no longer conflict with the automatic track arming behavior of Push. When using multiple Push control surfaces, they will no longer conflict with each other’s automatic track arming behavior.
When selecting Drum Mode on the Novation Launchkey Mini MK3 controller, the pad LEDs now correctly reflect their drum pad states upon loading a Set containing a Drum Rack on the selected track.
In the Novation Launchpad Pro MK3 controller’s Device Mode, the last selected parameter bank of each device instance will now be recalled upon reselecting the device instance.
The Novation Launchkey Mini MK3, Launchpad Mini MK3, Launchpad Pro MK3 and Launchpad X control surfaces will no longer revert to their default layout when MIDI port settings are changed in Live’s Preferences.
It is now possible to select parameter banks of Max for Live and plug-in devices via the Novation Launchkey MKII control surface.

Default Max for Live devices now use live.comment instead of live.text.
Updated the bundled Max build to version 8.1.3. For a complete Max 8.1.3 changelog, visit: http://cycling74.s3.amazonaws.com/support/version_8_1_3.html

The End User License Agreement displayed during installation is now up to date.

On Windows, when the Computer MIDI Keyboard is enabled, menus can now be accessed via their keyboard shortcuts (e.g., using “ALT”+”F” to access the “File” menu). Previously, this only worked when the Computer MIDI Keyboard was disabled.
In the Arrangement, time signature markers that change to 4/4 time are now indicated by a “4/4” text label near their markers.
Fixed a bug that prevented undo and redo operations upon creating a computer keyboard mapping, as well as redo operations after deleting a computer keyboard mapping.
Fixed a visual glitch that appeared when moving the mouse over an automation envelope.

Fixed some bugs that affected consolidating MIDI clips.
Previously when dragging a velocity marker, the mouse cursor would jump back to its initial position.
It is now possible to send MIDI clock messages to Live when External Sync is enabled and the transport is stopped, without causing all playing MIDI notes to be cut off. Also, sending a MIDI Start/Continue message to Live when it is already playing will no longer cause playback to briefly stop and then start again – instead, Live will simply continue to play.
When using an encoder on a MIDI controller to control a device parameter with discrete values, the control functionality will no longer be inverted.

Previously, when instantiating an Audio Unit plug-in, Live would sometimes display an error message about a folder that could not be created.
Previously, after replacing a Max for Live device and then undoing the operation, the wrong device name would be displayed.
Fixed a crash that occurred after unfreezing a track containing Wavetable, and then deleting the Wavetable device.
Parameter banks in the Wavetable device will now be correctly mapped to control surfaces.
Fixed a crash that occurred when selecting and freezing multiple tracks containing the External Instrument device.
If a track with a plug-in device is unfrozen, has its plug-in parameters or preset changed, and is frozen again, it will now record new audio instead of using the old frozen audio file.
Max for Live devices that are not visible are now correctly notified of active state changes.

When Push 1 is power-cycled or turned on while Live is running, the touch strip will now be correctly updated in Note Mode.
Previously, after cropping an audio file in Live, a flat line might appear on Push 2’s display.
Push will now display the correct notifications for playing clips (e.g., “Press Up Arrow to edit playing clip”) on the selected track.
When changing integer values of Max for Live devices from Push, the values are always in sync with those shown in Live.
When using Push, Akai Force MPC, Novation SL MkIII or KeyLab Essential, encoders that are not currently in use will no longer send MIDI CC messages to the selected track.
In Volume Mode on the Novation Launchpad Pro MK3 controller, button faders will no longer be set to an incorrect color when changes to return tracks are made.

Older Live Sets with missing components will now be correctly opened in Live.